Posted by Kazimiera Fraley at 10:09 AM No comments: 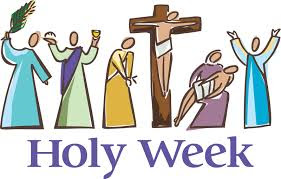 Thought for the Day:
Who is Jesus anyway?  What did he do on this earth?  How are you like the people in the streets on Palm Sunday?

Isaiah 50:4-9
How has God called you to be a teacher?
Do you ever feel that the message that God has given you to teach has fallen on deaf ears?
Do you ever feel as if God’s message has brought disgrace upon you?

Philippians 2:5-11
What does it mean to have the mind of Christ in you?
How can you empty yourself of all that you are so that God can fill you?

Matthew 21:1-11
Who were the people worshiping?
What about Christ were they drawn to?
What does it mean to truly worship Jesus and not a false image of who we think he is?
John 19:38-42
Does it surprise you that Nicodemus is in this story?
How had Nicodemus changed since we saw him last in John 3?
Jesus, their savior, the one they believed to be the Messiah, God’s own anointed is dead.  He has utterly abandoned them.  It seems that everything that he lived for and everything that he was has been crushed. Jesus is gone.
How do you think Joseph and Nicodemus felt as they took Jesus’ body to the tomb?
How do you think you would feel?

Thought for the Day:
What have you given to God?

Isaiah 42:1-9
How is Jesus’ last week embodied it this OT passage?
If we are called to act like Christ how does this passage call you to act or change the way you act?

Psalm 36:5-11
What does it mean to say that God is steadfast?
How can your love for those around you be more like God’s steadfast love?

John 12:1-11
This woman offered something precious to her, which had great value up to Jesus, what precious and valuable things have you given to God?

Thought of the Day:
What does it mean to walk through life they way that Christ did?

1 Corinthians 1:18-31
How is the cross foolishness to this world?
What is the wisdom in it, to those who know Christ?

John 12:20-36
How is dieing to yourself and living for Christ  like a stalk of wheat that has been planted?

Thought of the Day:
Is it easy to trust God and follow Christ in the darkness of life?

Isaiah 50:4-9a
How is God your hope?
What does it mean for God to be your salvation?

Psalm 70
How can you rejoice and be glad when people and things in this world seem to be against you?
Hebrews 12:1-3
How are the lives of Christians that have gone on before you good examples to follow as you follow Christ?

John 13:21-32
Are there ways that you have betrayed Christ in your life?
Do you really and truly understand that Christ has compassion on you and forgives you for all your failings?

Thought of the Day:
How does the rituals of the Church affect your life and your walk with Christ?

Exodus 12:1-14
What does it mean for us to remember the Passover as Christians?

Thought of the Day:
Christ did what he did and went through what he went through because of his love for you.  How have you in your thoughts, actions, words etc helped crucify Jesus?

Isaiah 52:13-53:12
How is it that you like a sheep has gone astray?
How are your actions responsible for Christ’s death?
Psalm 22
Why do you think the Psalmist cries out to God like this?  Have you ever felt like this?
Hebrews 10:16-25
What do you think it means for God to write God's law on your heart?
How are you/can you be changed by the laws of God being something inside of you instead of something external to you?
What ways can you can encourage others to love and good deeds?

John 18:1-19:42
In our lives we often treat Jesus in the ways that the different people in this passage did.  In what ways have you been a Judas, a Peter, a Caiaphas, a Pilate a member of the crowd, or a soldier?

Thought of the day:
What does it mean for you to trust God when everything in life seems to be falling apart?

Job 14:1-14
Job is aware of his mortality, that his life will be over one day.  It gives him some perspective on how great it is that God, who is immortal, cares for him.
What does it mean to you that God cares about you?

Lamentations 3:1-9, 19-24
Have you ever felt like God has turned against you?
Is it easy for you to remember that God's love for you is steadfast and that the mercy that God is willing to show you will never come to an end?

1 Peter 4:1-8
What do you think it means to live by the will of God as opposed to living by human desires?

Posted by Kazimiera Fraley at 9:40 AM No comments: 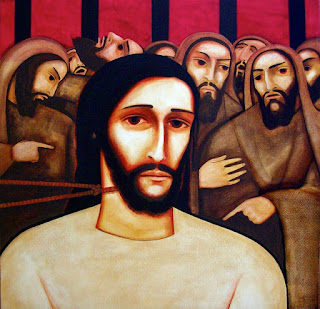 
Posted by Kazimiera Fraley at 8:03 PM No comments:

Journalling Toward the Cross: Fifth Week in Lent, March 18th-24th

This is meant to be used for devotional purposes during Lent. Grab a journal, read the passage, pray, look at the questions, think about your answers and then journal.

Thought for the Week:
What does it mean to be disappointed with the way God is working in your life?  Can you still trust God, even when you see the apparent death and destruction all around you?

Day 2:  Psalm 130
Have you ever felt like you are in the “depths,” stuck at the bottom of a metaphorical pit?
What parts of your life are you ashamed of?
When you are at the bottom of your rope is your first thought to call out to God?
Do you ever feel that there is no way you could possibly stand before God?
When you are at your worst, what does waiting for God look like?
Do you trust God when you are at your worst? When you find that you are in a dark place?
What would redemption look like in your life right now?

Day 4:  John 11:1-45
What do the sisters want from Jesus? Do you think they expected Jesus to raise Lazarus from the dead?
Can we ask too much of God?
Do you think it is alright to tell God you feel like God failed you?
Have you ever felt like God had failed you?
What was the truth?
How long did it take for you to see God’s hand at work?

Posted by Kazimiera Fraley at 8:56 AM No comments: 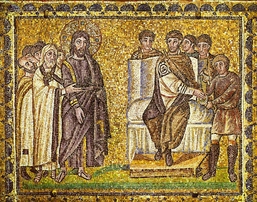 Posted by Kazimiera Fraley at 9:17 PM No comments:

Journaling Toward the Cross: Fourth Week in Lent, March 11th-17th

This is meant to be used for devotional purposes during Lent. Grab a journal, read the passage, pray, look at the questions, think about your answers and then journal.

Thoughts for the Week:
What does it mean that God works in mysterious way?  Are God’s mysterious ways sometimes hard to understand and see?

Day 2:  Psalm 23
What does this passage actually say?
Read it again slowly, pay attention.
What does the valley of the shadow of death look like in your life?
Do you let God comfort you?
What does God's table look like in your life?
If goodness and mercy are following you, what would it mean for you to slow down, or stop, so they can catch up with you?
What is God saying that God wants to for and with you in this passage?

Day 3:  John 9:1-41
Does this man seek out Jesus?
Has God ever come to you or done good in your life before you even asked?
How do you think this man felt when he was in the middle of these events? When they were questioning him and his parents?
Do you think it felt like his life was better or worse there in the middle of everything?
Sometimes is it hard for your to trust that God has actually performed miraculous things in your life and the lives of those around you?

Day 4:  Ephesians 5:8-14
What did walking in darkness look like in your life?
What does it mean to be a child of the light?
How is your life light now compared to the former darkness?
What do you think are unfruitful works?
Do you ever find yourself participating in such things?
Posted by Kazimiera Fraley at 8:51 AM No comments: 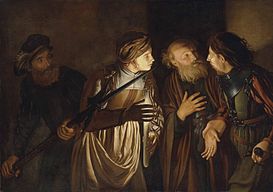 Posted by Kazimiera Fraley at 1:29 PM No comments: