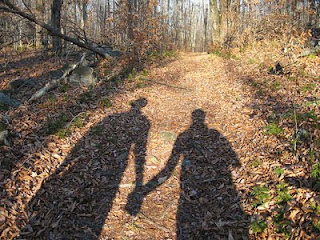 OK I heard a piece, a very brief piece of an interview (brief pieces actually, because I was dropping my daughter off at pre-school and was listening in between talking talking to her and taking her into school) on the radio today about being in relationship, so I admit I have little context for what was said but it got me thinking. The person being interviewed was talking about how the American ideal for being in relationship, and I took her to be speaking about marriage, while maintaining complete independence and at the same time being completely united with the other person. She then went on to basically say this is a myth, that we can not be fully in relationship with another person without giving up a little bit of our independence. There is no mystical "balance" between these two things we can not be a completely and wholly independent human being AND be in a committed loving relationship. She seemed to be postulating that when we are in a truly loving relationship with another human being we give up some part of our independence to the other and submitting our independence to them so that we may move through life mutually. Love gives up the me and mine for the other person. Her example was now that she is in a loving marriage she can not just decided to go off to Africa for a year by herself like she could have done previously. Making a decision like that on her own would be detrimental to the relationship she has with her husband. The decision would need to be submitted to her husband and the two of them would need to figure out what they need to do in light of this desire and it is possible that the desire would never come to fruition because it would simply not be good for "them" even if it might be good for "her." (I might be putting more into the conversation than was actually said. I have had several hours of thinking about what was said and time and though distorts what was actually heard)

The idea of giving up part of ourselves for love intrigued me. Love is about giving a part of ourselves over to the other. We are no longer in charge of our ownselves. We are not longer the sole proprietors of our time, money and resources. We are living in conjunction with another. We submit what I want to someone else. We give up our individuality. And in doing so we gain something.

It seems to me this idea of giving up part of our individuality, giving up the "me" and "mine" is at the heart of what it means to be in relationship with God. So many people see being a Christian as being about giving up, not doing, limiting what we want to do. But Christianity is about living in a loving relationship not simply with another human being as we do in marriage but living in loving relationship with the God of the universe . When we do so we give up a bit of our individuality. We are no longer making decision simply based on what is good for me, what I want to do, but what will further this relationship. We "give up" things we want to do, change the way we live, change what is important to us because living the same way as we did before when "I" was the only who mattered in my decisions because those things are not good for this relationship which is shared with God. When we become Christians we do not change the way we live because God is a task master who desires to dominate and force us to live differently but we change the way we live because our old life is not longer conducive to furthering this relationship which we have decided is the defining relationship in our life.
Posted by Kazimiera Fraley at 1:16 PM 1 comment: