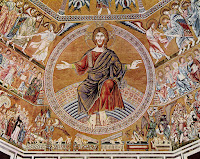 Posted by Kazimiera Fraley at 9:07 AM No comments:

Posted by Kazimiera Fraley at 8:08 AM No comments:

Things never went very well for Elijah. It seemed the people never listened to God. When they did not, Elijah was always asked, by God, to go back to them, and give them the opportunity to change and turn back to God, or suffer the consequences of their unfaithfulness. The pesky thing about always being right is, no one ever listens. Time and time again the people chose to do their own thing and not heed the warning from God, Elijah brought to them. Then, when God's protective hand was removed from them, and terrible things happened, it was always Elijah's fault. God said, “Repent, change your ways,” the people refused and there was a famine and a drought for three years. It was Elijah's fault, so he was forced to hide in the wilderness being taken care of by birds.

Posted by Kazimiera Fraley at 9:58 PM No comments: