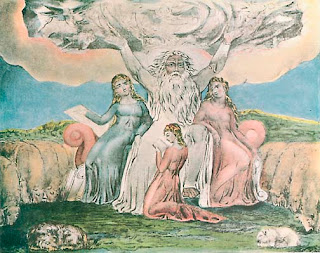 This week I am preaching on the last chapter of Job. I have been preaching on Job for the last month. Four sermons from four different sections of the book of Job. This week I am preaching on the last chapter. You know the chapter we all want to skip to because it contains the ever longed for happy ending. Well along with "And the Lord restored the fortunes of Job," this chapter also includes two other things, which if I was a swearing woman, would swear were not in the Bible the last time I read the book of Job. I just know that God slipped them in there this time just to keep me on my toes and of course he aligned a myriad of commentaries and what not so that almost all of them talk about the new content.

The thing is one thing in the last chapter of Job which I had not noticed before is believable but two? Surely I am not so unobservant as to not notice these two remarkable things before. God added them while I was sleeping. It is a great cosmic joke, which God has gotten a fair number of commentators in on.

So what, you ask are the two things of which I am positive were not in my Bible before? The first happens before Job's fortunes are restored but after he says, "Oh, yeah, sorry for all that yelling I did God." God apparently is not happy with Job's friends. They have not had much faith in Job. They seem to think he is a pretty rotten guy and must deserved to have all his stuff taken from him, all his kids killed and all the the terrible horrible and quite disgusting disease which Job seems to have contracted. They seem to think bad stuff happened because you have been bad, and some pretty bad stuff is happening to Job so they conclude that Job must be equally horrible. But really truly he has not deserved any of it. Bad stuff happens to good people. Job is one of the good people.

The friends are asked by God to go to Job and beg him to pray for them so they can be forgiven of their false conclusions and that is just what they do. The come to Job and are like, "Sorry, man, would you forgive us and pray for us." Job is a pretty neat guy even when his life is in shambles and he is covered in the nastiest boils you ever did imagine. So he in his terrible state prays for his friends and guess what happens? Life gets better. You got it. He prays for his friends and his boils go away. He prays for his friends and he somehow he manages to amass twice as much stuff as he did before. He is healthy and wealthy and his wife is super fertile. And Job has ten more children, seven sons and three daughters. Now how is that for the power of selfless prayer?

And now for my second surprise in one chapter. The daughters have names. I know, you are like, well of course they have names but the fact of the matter is only a handful of women in the Old Testament are named, as in the Bible has their names written down. Job's wife doesn't have a name but these three beautiful women (the Bible tells us this as well) get names; Jemimah, yes just like your favorite syrupy "Aunt"), Keziah, and Keren-Happuch. And not only do they get names but they get an inheritance as well. I don't know how much you know about Old Testament inheritance practices but here is the scoop. Girls get nothing, unless there are not sons, which there are seven of them, so these girls should have gotten nothing. But these girls get an inheritance alongside of their brothers how is that for equality in the land of inequality. They get names (their brothers don't btw) and they get an inheritance. This is pretty cool.

So yeah, I was surprised by the Bible in one chapter. It just goes to show no matter how many times you read the Bible there is always something new in there to discover.
Posted by Kazimiera Fraley at 1:07 PM 2 comments: